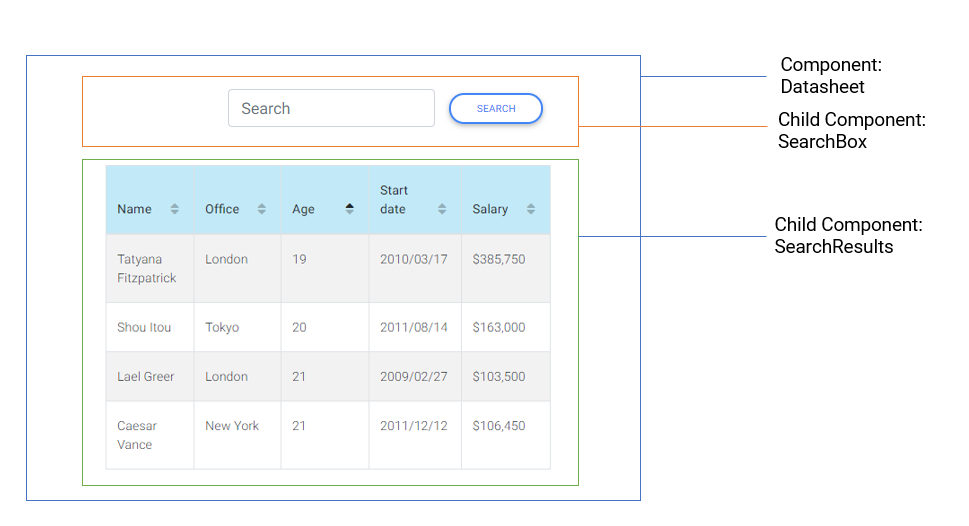 Within the last lesson we went through the most important file within our project. Now we will focus on the components.

Among other advantages, Angular gained its position thanks to components-based architecture.

Components can be thought of as small pieces of an interface that are independent of each other. Imagine that you have a simple application with a list of items and a corresponding search box to retrieve the items by word matches. The box with listed names, the search box, and the main sheet where the other two boxes are placed are all considered separate components in Angular.

Components of a similar nature are well encapsulated, in other words, self-sufficient. Developers can reuse them across different parts of an application. This is particularly useful in enterprise-scope applications where different systems converge but may have many similar elements like search boxes, date pickers, sorting lists, etc.

Let's have a look how components are build within Angular code 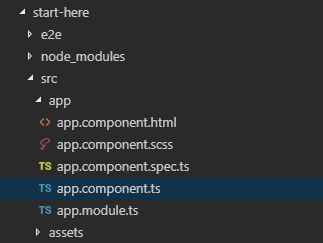 As you can see within a src/ location, there is a folder called app containing a few files starting with app.* name inside. The app represents App component.

Usually components are organised within a folders (1 component = 1 folder). Each Angular project has to contain at least 1 component. Each component consist of few files:

Let's open file located in /src/app/app.component.ts. You will se the following content 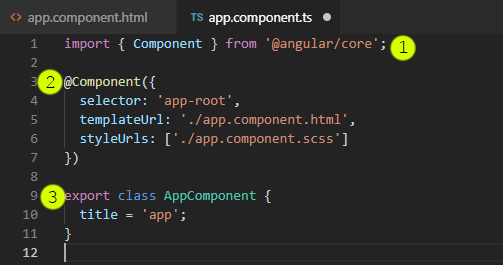 At the begining of the component's .ts file we have to import a Component from the Angular library. This is required to make our component working. Component is a Decorator (don't have to bother what does it mean for now) - it provides a configuration metadata that determines how the component should be processed, initialized and used in a runtime.

Whenever we want to use other components within another component we also have to import it in that place. (we will learn how to do that in a next lesson).

The @Component decorator which we imported in a first line allows us to specify a matadata for our component. The metadata contains few parameters:

You might noticed from a previous lesson, that we have used a <app-root></app-root> in the index.html file.

Our component can be called in your HTML code just like any standard HTML tag, i.e:

The last part of our component is a Component Class which contains atributes and functions. This is the place where entire logic of given component is stored. In a next lesson we will fill this component with some functions to make our application working.

The template file which is responsible for view of our component. A template looks like regular HTML, except that it also contains Angular template syntax. Our template can use data binding which allows us to synchronize data between our Application and DOM.

This file contains all the styles for our component.

Within this file we will create a tests of our component. Tests are important for each application, using them help us avoid breaking components logic while making some updates/enhances in it.

First, if you open the application module file src/app/app.module.ts: 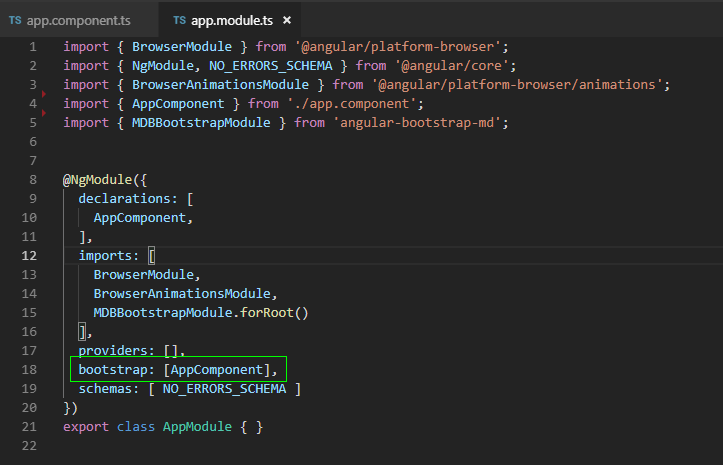 You'll notice that, it's added to the bootstrap array of the module definition.

Second, if you open the src/index.html file (the first file that gets rendered when you visit the application URL) of the application. You'll notice that, it's called inside the document tag.

Important:
app.module.ts file is only required for our App component (root component). All other components which we will use inside our application wont require module.ts file to work.