What is a Function in Python?

A Functions in Python are used to utilize the code in more than one place in a program, sometimes also called method or procedures. Python provides you many inbuilt functions like print(), but it also gives freedom to create your own functions.

In this tutorial, we will learn

How to define and call a function in Python

Let us define a function by using the command " def func1():" and call the function. The output of the function will be "I am learning Python function".

The function print func1() calls our def func1(): and print the command " I am learning Python function None."

There are set of rules in Python to define a function.

Significance of Indentation (Space) in Python

Before we get familiarize with Python functions, it is important that we understand the indentation rule to declare Python functions and these rules are applicable to other elements of Python as well like declaring conditions, loops or variable.

Python follows a particular style of indentation to define the code, since Python functions don't have any explicit begin or end like curly braces to indicate the start and stop for the function, they have to rely on this indentation. Here we take a simple example with "print" command. When we write "print" function right below the def func 1 (): It will show an "indentation error: expected an indented block". 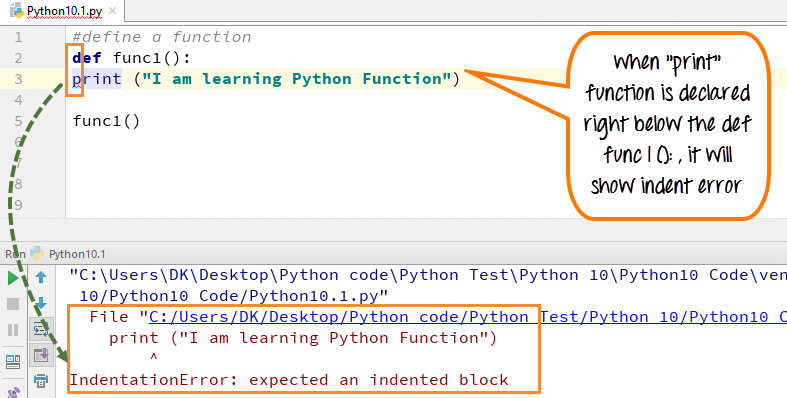 Now, when you add the indent (space) in front of "print" function, it should print as expected.

At least, one indent is enough to make your code work successfully. But as a best practice it is advisable to leave about 3-4 indent to call your function.

It is also necessary that while declaring indentation, you have to maintain the same indent for the rest of your code. For example, in below screen shot when we call another statement "still in func1" and when it is not declared right below the first print statement it will show an indentation error "unindent does not match any other indentation level."

Now, when we apply same indentation for both the statements and align them in the same line, it gives the expected output.

Return command in Python specifies what value to give back to the caller of the function.

Let's understand this with the following example 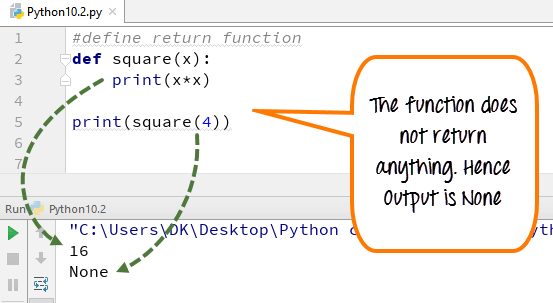 Step 2) To make this clearer we replace the print command with assignment command. Let's check the output. 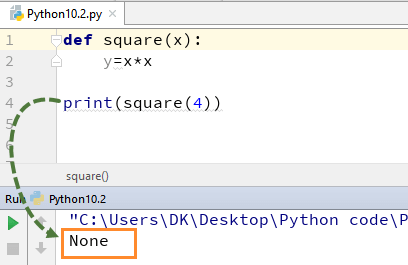 When you run the command "print square (4)" it actually returns the value of the object since we don't have any specific function to run over here it returns "None".

Step 3) Now, here we will see how to retrieve the output using "return" command. When you use the "return" function and execute the code, it will give the output "16."

Step 4) Functions in Python are themselves an object, and an object has some value. We will here see how Python treats an object. When you run the command "print square" it returns the value of the object. Since we have not passed any argument, we don't have any specific function to run over here it returns a default value (0x021B2D30) which is the location of the object. In practical Python program, you probably won't ever need to do this.

The argument is a value that is passed to the function when it's called.

In other words on the calling side, it is an argument and on the function side it is a parameter.

Step 1) Arguments are declared in the function definition. While calling the function, you can pass the values for that args as shown below

Step 2) To declare a default value of an argument, assign it a value at function definition.

Example: x has no default values. Default values of y=0. When we supply only one argument while calling multiply function, Python assigns the supplied value to x while keeping the value of y=0. Hence the multiply of x*y=0 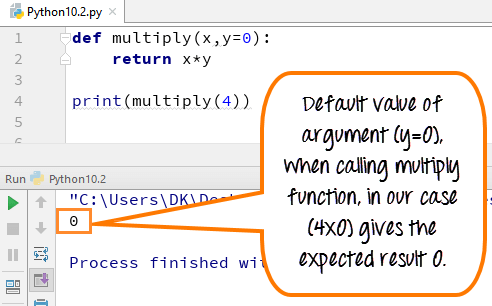 Step 4) You can also change the order in which the arguments can be passed in Python. Here we have reversed the order of the value x and y to x=4 and y=2. 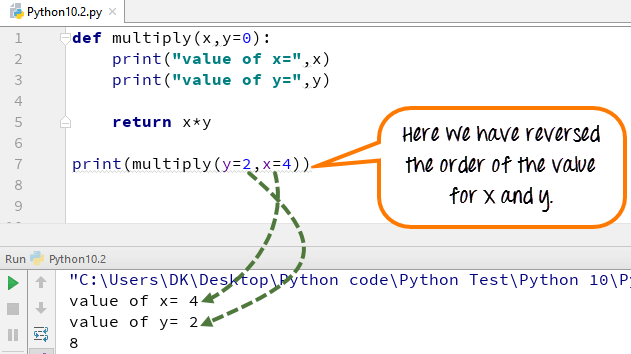 Step 5) Multiple Arguments can also be passed as an array. Here in the example we call the multiple args (1,2,3,4,5) by calling the (*args) function. 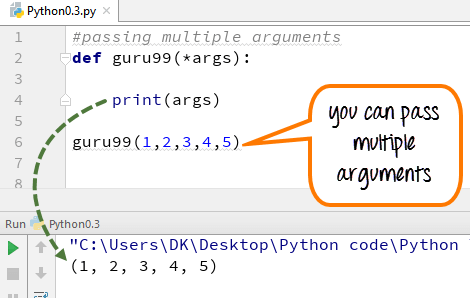 Here is the complete Python 3 code

Here is the complete Python 2 code

Function in Python is a piece of reusable code that is used to perform single, related action. In this article, we will see